Coffee is poured ~ and bait escaped some time during the night. Since we share our home with a couple of dogs and one is a Jack Russell that loaths mice and rats, I figured I was in trouble. Hawk checked the mouse trap, but it was still empty. As Josiah was getting ready for school, he spotted the mouse hiding under the kitchen island. After a little demolition work~ bait was once again caught and we headed out the door. There were a couple hawks hunting not far from the house, but none were interested in mouse for breakfast.

I harnessed up the pigeon and we took the back roads to the spot we had seen the young bird last night.

As we pulled down the old bouncy dirt road, Hawk spotted her sitting on a power pole. ~ I got ready and as we went by I carefully tossed the bait into the grass~ it had barely left my finger tips when I looked up and she was already diving.~ Wham! wings spread in a silent attack. We hurried back, but she wasn’t caught yet, just very hungry. I watched through my camera lens from a distance waiting until I was sure she was caught~ and Hawk watched beside me through his broken monocular. Breath held, it seemed like forever~ but when I reached for her~ she pulled lose and flew a few feet away. I backed off immediately thinking I had just lost this bird, but to my amazement when we got far enough away, she came running out of the brush, sauntered down the road and once again captured her meal (the pigeon) This time she was caught and I was able to get her gathered up and released from the trap~ hooded and on the way home. with a HUGE smile on my face. Hawk released the mouse into a cut oat field ~ where I am sure he will be glad the Jack Russell will never find him. 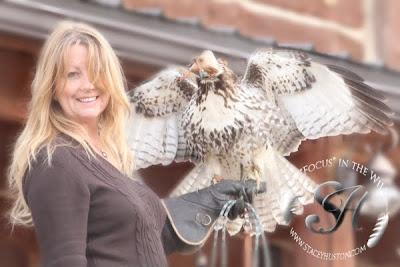 Back at home~ she has on her new jesses and anklets ~ she sits the fist very well and is a very brave girl. 1300g~ 45.85oz trapped weight

She ate the first night~ and today lets me enter the mew unhooded and pick her up with no fuss at all, even though she’s still nervous and puffed up to try to scare me.

Looking forward to working with this beautiful girl.. as for a name, I haven’t decided yet.. maybe I will let my readers and “her” fans pick a name..~ 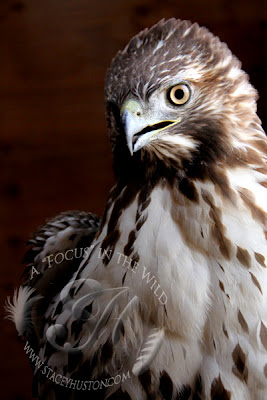 70-80% of all raptors die in their first year of life. This girl was very hungry and she came after the bait almost immediately~ I have no doubt that if she hadn’t found food in the next few days.. she would have been in the percentage that didn’t survive~ The bird are usually hungry or in poor health if they come to the bait in the first place.. healthy birds who are successful hunters will most often ignore the trap~ adult birds who are proven hunters cannot be trapped for falconry purposes. I usually fly them for a year or 2 then release them. at this point they are past that first year, and are stronger and confident hunters ~ 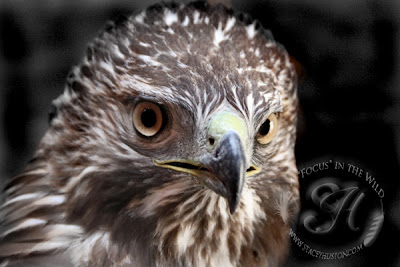