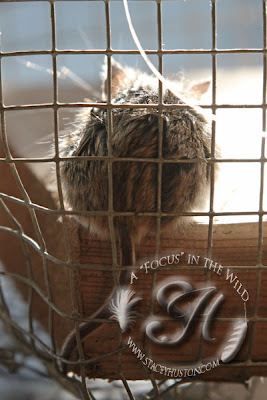 As some of you know I am, and have been a licensed falconer for 11 years now. I have been blessed to work with some amazing people in the rehab community and some unforgettable birds.

The last few days I have been thinking about each one of the hawks that I have had the pleasure to connect with. And as I sat on a remote dirt road, anxiously watching a hawk through my camera lens (don’t have a decent pair of binoculars ) I felt that same excitement and anxiety that I felt as I watched my first falconry bird come in for the bait. The only difference is 11 yrs ago~ I had already spent a month searching and trying to convince a legal bird to come to the trap.

Day 1 trapping for a falconry bird. ~ set the live trap out last night hoping to catch a mouse to use for bait. My husband went down to the wood pile to check and see if the peanut butter and bird seed had worked~ while I got ready for the day. No mice in the trap .. But after finding my winter gloves, and a little help from the lab dog~ (ok.. he isn’t much help, but he thinks he is) Hawk was able to capture a small mouse..small is better than nothing. I grabbed my cameras, my capture falcon license, an old towel and various other pieces and parts of equipment I would need and we headed out the door.

The weather is beautiful and right off we were able to locate a couple of bird sitting on the power poles ~ both adult birds~ so I didn’t take the time to set out the bait. Late morning we spotted a tall, thin juvenile red tail sitting on a pole above a road killed pheasant. I put out the bait and we backed off to watch. Cars rushed by on the high way and I worried that her hunger would get the best of her and she would go for the pheasant she was watching and get hit. There was a break in traffic and she finally settled down~ her head bobbed up and down as she focused on the bait in the trap. She nervously looked around, and finally~ her wings spread as she swooped down toward the trap…only to scoop up a garter snake from the highway. She flew to a nearby rise and lid on a sage brush to enjoy her meal. 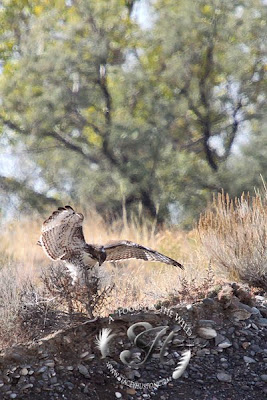 I gathered up the trap and we ran back to town to pick our son up from school. ~

Later that afternoon, after returning to the area to see if I could spot her again, and setting out the bait for a couple different birds and getting ignored~

We located another young redtail in a tree at the edge of a field. Her bright white chest patch made her easy to observe from a distance. I threw the bait for her 3 different times. At one point she came in and lit on the road next to the trap.. checked it out for a bit and then retreated to a nearby fence post~ before returning to the line of trees. Not sure if she was hoping for a larger meal, or just confused by the trap~ but if you ask me ~ I think the mouse made a deal with her.. or maybe told her what I was up to and she decided it wasn’t worth the effort.

on the way home we spotted a few different hawks close to the house and decided to try to be out at sunrise to try again.

Not a bad day at all for the first day of trapping. 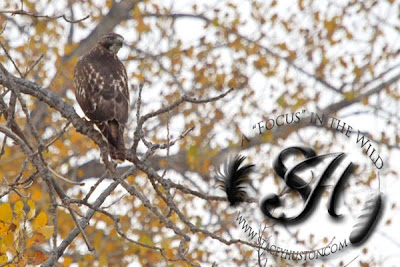