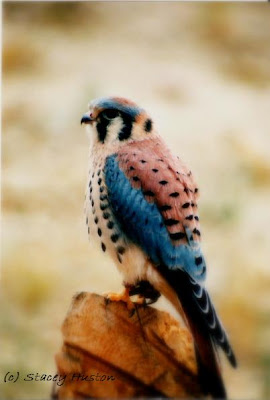 My beautiful little "Skeeter".
I named him for the way that he would buz around my head
while out hunting.
Skeeter's favorite food was grasshoppers,
he became an expert hunter of many small things in the summer that we spent together.
Late that fall I released Skeeter.
He hung around for a couple weeks before he ventured off on his own..
about two weeks later he came back for one night
(to say goodbye??)
... Each time I come across a kestrel,
I often wonder if it could be my little friend stopping by to say hello..
Posted by Stacey Olson at 8:50 AM

Thank you for the invite to your pages. I love the pics of the kestrel. I had one, long ago, and would like to train another some day. I'm going to bookmark your pages, and come visit. Yours are far more artistic than mine! I don't know how to do too much in the html realm. Not too many of us women falconers out here! Good luck with your birds!

Namaste' Stacey! these are funny little birds of prey, they definitely have the energy *buzz* about them. *grin* I have no doubt he visits if/when he can. GORGEOUS. Metta

Carolyn
Thanks for taking the time to visit my page, great to have you here. I don't know the html either, just winging it(pardon the pun lol)
keep up the good work on your site, I love the name Ladyhawker..

Thanks sky,
yes Skeeter is as gorgeous little warrior..l am honored that I was there to see him on his journey in life.