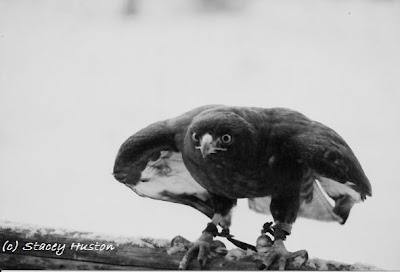 Each bird that I have worked with has its own personality and strengths. These personalities can be so unique that sometimes it is difficult not to humanize them. My first falconry bird was Kiva, a mellow tempered male red-tailed hawk who at times, seemed to have a sense of humor. It was obvious that he enjoyed the hunt, but would often come back to hover just off my shoulder as I walked along the sandstone ridges in search of rabbits. I enjoyed hunting with Kiva and came to expect his antics when out in the field. I can recall many specific incidents while we hunted. Maybe that’s how it is with your first bird, but Kiva never ceased to entertain me and each moment spent with him helped to fuel the fire and the passion for working with these birds.
Therefore, when I started hunting with Absaroka, a fantastic dark morph female, I was not prepared for her no nonsense style of hunting, or the roll of flusher (dog) that I quickly was demoted too. This photograph captures the essence of “Abby’s” personality (if you can call it that) .She lived for the hunt, and only the hunt, and would become obviously annoyed with me if I wasn’t working fast enough to flush something for her. She would even go as far as chasing eagles and owls away from our usual hunting area. When Abby would pull this stunt, I worried for her, but thankfully, she always returned a few moments later to land on my fist ready to continue hunting. It did not take me long to I learned to appreciate "her" style of hunting, and I realize that they too have their strengths and will not hesitate to draw on them to survive in this ever-changing world.

Wow...what magnificent birds! I know a couple people that do rehab work around here. Red tail hawks are most common around here, and I'm slowly getting to know the others. A recent highlight for me was seeing a bald eagle - flying over the suburbs - during the Christmas Bird Count!

Thanks Dave. To be honest. I didn't know my birds at all until I became a falconer. Now I am pretty good, as long as they are birds that I am familiar with. We have lots of Bald Eagles here, esp in the winter. and Good for you, We also do the Christmas bird count, haven't gotten in on the Eagle count that they do here yet, but we were invited last year, just to busy..
Thanks for your wonderful comments, And come back soon..

Beautiful pictures, Stacey. It must be very interesting and rewarding work!

Sandpiper,
Thanks for visiting my falconry, rehab page. It IS very interesting and rewarding, and yes sometimes it can be work, but mostly it is just fun. Some people have asked me what I get paid, and I don't. Falconry is a hobby, a sport and an art, and the rehab work that I do is totaly volunteer. But well worth it. :)

I love those eyes!! So intense.

I'm sure it is rewarding. My friends who used to have a raptor rescue center here did it voluntarily, as well. It was a big part of their lives for many years. They finally had to retire though and it wasn't an easy decision.