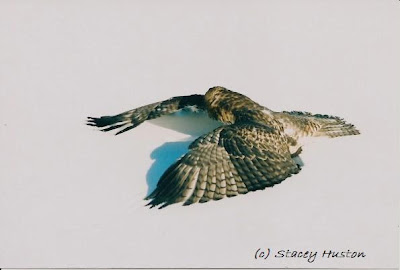 This young Red-tailed hawk fell out of its nest and ended up with a broken wing. Ironside bird rescue was contacted and the wing was repaired. I got the privilege of working with this little one once he healed.
We worked on conditioning the flight muscles and being sure that he was strong and skilled enough to hunt on his own once released. Taking this extra step helps to ensure this birds chances of survival once he is returned to his home in the wild. It did not take long before “Soddy” was flying well and chasing bunnies. For a while, he was pretty unsure of himself and his abilities to complete the task at hand. This picture was taken on a bright beautiful morning. The morning that I knew Soddy was fully capable of hunting for and feeding himself… Below his outstretched wings and tail feathers, buried in the fresh fallen snow, he holds in his talons “his” first meal and my hope for his future.
Posted by Stacey Olson at 9:32 AM

I can almost see the bunny clutched in the birds tallons beneath the snow.. WOW great shot...

A beautiful picture. . . reminds me of a Pontiac Firebird.