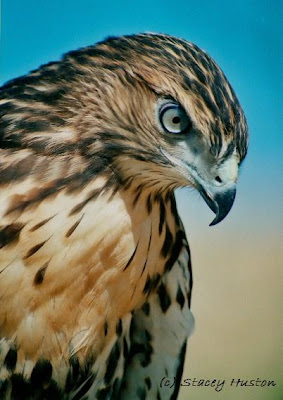 These powerful raptors are virtual killing machines built for speed, endurance and aerial displays that easily put any of man’s flight technology to shame. The raptor’s ability to seemingly drop out of the heavens at breakneck speed, and recover itself only feet from the ground, while simultaneously striking and killing its prey is truly a feat man has yet to duplicate.

The red-tailed hawk is a hardy predator, although its body is built of a framework of thin hollow bones and the body is covered with soft feathers. This super predator can slam into a running rabbit at speeds exceeding fifty miles an hour and slice through brush with the efficiency of an arrow. Certainly, this majestic bird is a testament to nature’s diversity and magnificence.

So next time you hear the cry of a hawk on the wind, take a moment to look up and study the flight of this bird of prey and be glad they don’t hunt us.
Mike “Hawk” Huston